The most visited national park in Madagascar

The Andasibe Mantadia is the most visited park in Madagascar because of its proximity to the capital, but also because of the variety of its fauna and flora. The park is located on RN2 about four hours from Tana, and 140 km east. From the east coast, Andasibe is 220 km from Tamatave. Despite the existence of various railway stations and railway tracks that cross the region, the railway line has not been active for years.

The altitude of the Andasibe region varies from 900 to 1250 meters, the terrain is rough with many small rivers that flow through the valleys.

The climate is humid of a tropical type, the rain is 1700 mm for 210 days a year and the average temperature is 18 ° C. The warmest months are from November to January with an average temperature of 27 ° C, it is cool between July and September when the temperature can drop even below 10 ° C. Between January and March, the rains are almost continuous. We advise you to wear non-slip and waterproof shoes without thinking about the seasons. 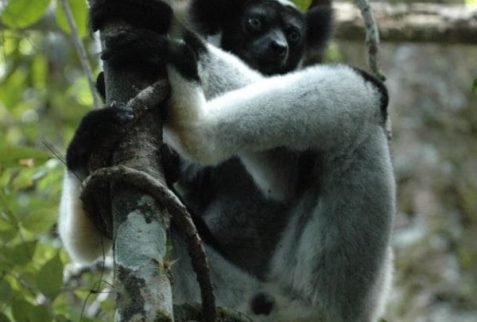 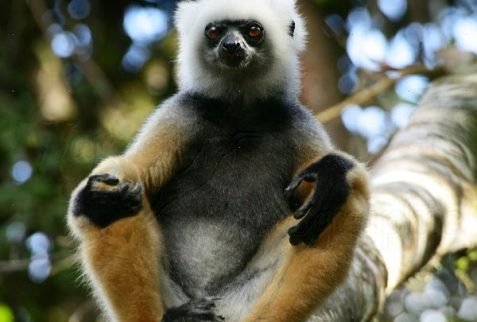 The greatest attraction of the park is undoubtedly the observation of lemurs and birds. The encounter with these animals in nature is not found anywhere else making it an unforgettable experience. The Andasibe park includes two separate reserves that can be visited day and night: the Mantadia reserve which includes an area of 15500 hectares and the Analamazaotra reserve with an area of 810 hectares.

It is a primary forest of which 10 000 hectares are almost intact with small paths traced to make the experience more pleasant.

Both at a tourist and scientific level, the Mantadia reserve is practically a gold mine to meet mammals, reptiles and birds. Let’s not forget the different species of orchids, a sacred lake, a natural swimming pool and various waterfalls. The lemurs are the masters and the reserve and with a little luck, you can see the golden sifaka, and almost certainly some indri, black and white ruffed lemur, diademed sifaka and more.

In one morning we saw 5 species of sifakas in less than 1 hour, on the other hand, in 5 hours once we only saw 1 small group of indri.

The reserve of the Indri and Analamazaotra

Analamazaotra Reserve is famous for its population of indri lemurs, the largest and loudest lemur. The Indri Indri measures approximately one meter with a face like that of a bear cub, and the color similar to that of a panda. The long hind legs are very powerful allowing these primates to jump over 10 meters, with an agility to perform a U-turn almost in the air. The voice makes this animal very special and different from the other lemurs, in fact, the other lemurs are grunting and shouting, while the Indri sings (although sometimes it may seem like the police siren). Usually in the reserve between one and two hours after sunrise or immediately after sunset, you will have the opportunity to hear them sing at the top of their lungs. The Indri Indri are monogamy and live in small family groups of around five animals. In Malagasy, the Indri are called “Babakoto” whose meaning is “father of Koto”; according to legend, a boy named Koto went to the woods to collect wild honey. After being severely stung by bees, he falls from the tree and is saved in flight by an Indri.

Nine species of lemurs can be found in Analamazaotra, as well as the indri you may also see the brown, and lesser bamboo lemurs, plus three nocturnal species: eastern woolly lemurs, the rufous mouse and the greater dwarf.