Northern Makay and the Mangoky River

Northern Makay and the Mangoky River

This trip to the North of Makay takes you to unique, varied and unspoiled places. Rocky ridges dominate the eastern furrow, in plateaus marking the dividing line of the waters, accompanied by a striking sequence of landscapes and biotopes. We will enter deep gorges and gallery forests populated by lemurs, crocodiles and frogs. We hike semi-desert plateaus, a set of small winding valleys – the sakasaka – and superb viewpoints that provide a panoramic overview of the geomorphological complexity of the place. The descent of the Mangoky river gives us the opportunity to discover more unspoiled nature. The mighty river flows towards the Mozambique Channel. The banks are home to exceptional fauna, crocodiles and baobabs. This is an epic adventure. 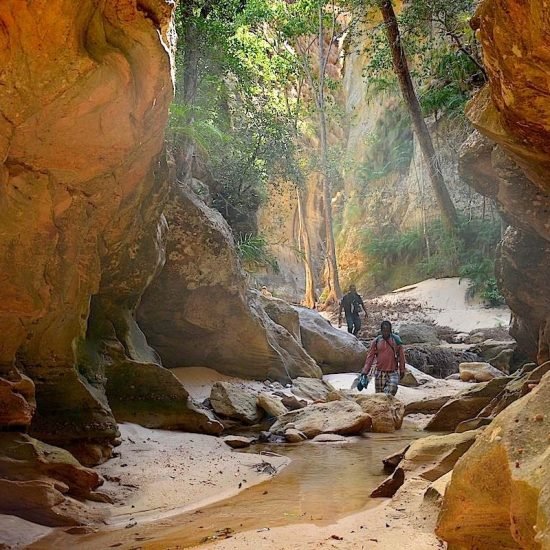 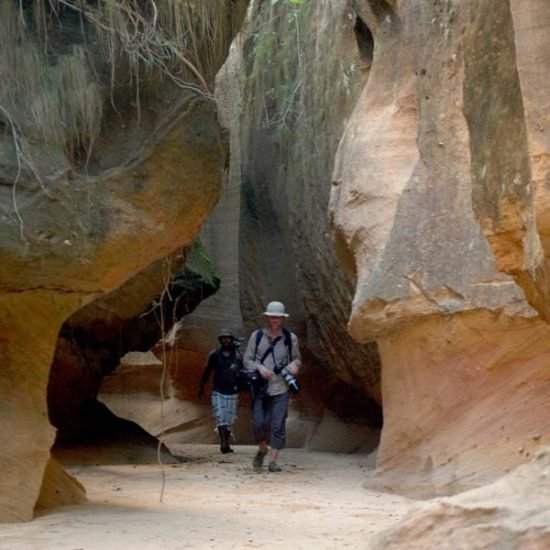 Meet & Greet at your chosen hotel in Antananarivo, and briefing before departure. We aim to depart before 8.30. After our briefing we begin the trip southwards across the characteristic landscapes of the Highlands by taking the RN7, the winding national road, bordered by a mosaic of fields of various cultures and rice terraces. In about 4 hours we arrive in Antsirabe. Lunch break and pousse pousse visit of the town and its main market. We then continue west towards Miandrivazo where we arrive early in the evening. Gradually, the mosaic of rice terraces and various cultures, with hills topped by red brick houses of the Central Highlands gives way to the arid landscape of the Middle West Sakalava and the “peeled” mountains ragged by erosion from the south of the Bongolava massif. Hotel Princess Tsiribihina or similar.
2

After breakfast we continue traveling south to Malaimbandy. From the small town of Malaimbandy, we take secondary track to to reach northern base of the Makay massif. This is the starting point for our experience. After lunch, we start our hike. On foot, we cross the Manampada river, we leave the crops and the village behind us. Hiking westwards, across the plateau, we reach the first Makay sandstone reliefs. A shallow lake, a refuge cave and a pretty river bed of white sand welcome us for the night. Overnight camping. New Makay Protected Area The entire massif located between the towns of Malaimbandy to the north and Beroroha to the south was classified as a New Protected Area by interministerial decree in 2017. The purpose of this decree is to regulate uses, in order to reconcile human activities and preservation of the environment. the environment, and in particular to ensure long-term conservation of landscapes, the integrity of biodiversity, the sustainability of ecological functions and the maintenance of the productivity of the ecosystems necessary for the well-being of neighboring communities, as well as the sustainable use natural resources. Détours Madagascar, through its involvement in the preservation of natural and human spaces, is fully involved in respecting the healthy and sustainable management of the New Protected Area. Also, your participation as a traveler frequenting the Makay massif, we all participate financially in the protection and effective management of this unique place.
3

Our caravan walks through the cliffs, an easy route, we set foot on the plateau. The objective now is to reach a narrow fault, covered with pandanus, palm trees and ferns, which opens the passage to the large watershed of Manampanda. Our progress takes place completely with our feet in the water, in a lush green environment. The lemurs are easy to see. At our feet, caught in the boulders of the river bed, petrified woods bear witness to the remains of a fossil forest. Our tributary joins the Manampanda River and the water flow suddenly becomes much greater. Overnight camping in a beautiful sandy beach by the river.
4

At the start of the day, after a couple of hours of hiking in the savannah, we reach a very rugged region, a tangle of faults, ridge lines similar to large labyrinths, the sakasaka. A tortuous path gives us access to the major fault of Sakapaly which flows to the east of the massif. The 360 ° panoramas are magnificent. Canyons, faults, summits and peneplains follow one another. We set up the camping in a valley on immaculate on a white sandy beach by the river.
5

This great day takes us west of the ruiniforme sandstone barrier. The deep gorge of the Sakamaly river cuts deeply into the massif. True aquatic day, this fault shelters a beautiful forest with majestic trees. Lemur families populate the visible peaks from time to time. Crocodiles are also present, we will see their traces. Overnight camping by a river.
6

We begin the day by leaving the river bed to follow a slope leading to the ridge line 400 meters higher. A technical passage without difficulty will spice up our progress a little, a safety rope allows to cross this short rocky passage. We now follow a splendid balcony path which dominates the eastern plain bordering the plateau. A few latan palm trees on a wide pass mark a new hydrographic basin and new gorges. In these tree-lined gorges, we will have a good chance of finding lemurs. Two species coexist, Fulvus rufus and Prophitecus verraux. Overnight camping.
7

Starting from our place of Bivouac, we walk about 2h30 to reach Bekenina where we will spend our last night in the Makay Massif. Multiple varieties of palm trees and ferns populate the banks of the gorge. Our camping is set up on the banks of the river between the large dark cliffs.
8

From Bekinana we reach Beroroha by car. In Beroroha we can see the the powerful Mangoky river that literally cuts the sedimentary plateau in 2 sides. We reach the banks of the Mangoky in the village of Beroroha after a few days of trekking. Tomorrow we will begin the river descent. Overnight camping in Beroroha.
9

In the early morning, we embark on our traditional canoes to begin the extraordinary descent of the Mangoky river. The navigation is peaceful but we go deep into the wildest places of western Madagascar. Thanks to the river, we rub shoulders with local residents for whom this artery is the only axis of movement. We will be camping on white sandy beaches. In the second and third days of navigation, we will admire incredible nature and baobabs. Gradually, we sink into unspoiled nature. The mighty river flows towards the Mozambique Channel. The banks are home to an exceptional fauna, languid crocodiles, wild lemurs, myriads of birds, and bats. As we navigate, we discover this fragile giant. The most beautiful baobab forests stretch along this immense corridor leading us to the sea. The last day of navigation on the Mangoky river we reach the village of Ambiky. Camping in an amazing baobab forest.
10

We leave the banks of the Mangoky river to reach the wild western shores of Madagascar, by the Mozambique Channel. 2 hours' drive separate us from Morombe from where we will take the sandy track that links Morombe with Ifaty with over 200 km of magnificent landscape. We will arrive in Ambatomilo late in the afternoon. Many activities can be done in Ambatomilo: snorkeling, swimming and lazing on the beach and traditional Vezo canoe ride. The nearby spiny forest is home to the Mikea people, but also many endemic species, plants and animals. From late June to mid-September, watching the dance of the humpback whales along the coast during their annual migration. Sea trips by canoe can be be  organized to see the whales from closer range. Hotel Shangri La Lodge or similar.
11

Early departure to catch the direct afternoon flight to Antananarivo from Toliara. End of our services.

The Main Sights of the Tour

Antsirabe is located not far from the Malagasy capital, at an altitude of more than 1,400 meters: we have to say that during the austral winter, it is cold for Madagascar. This ancient spa town has kept its quaint colonial style. Antsirabe is peaceful and calm, perhaps a little sleepy. You can go on lovely mountain bike or horse rides in the Vakinankatatra. In addition, the city has thousands of beautifully decorated rickshaws. Great for hikers, Lac Tritriva and Mt Ibity are great destinations.

Only 220 km separate Antsirabe, one of the coldest towns in Madagascar, from Miandrizavo, one of the hottest. That is to say if we change altitude and relief as quickly as climate. Miandrizavo is a peaceful town of 6000 inhabitants, ideal for enjoying the sunset over the river.

The Makay massif is a mountain range from Madagascar located north of the Isalo massif, in the west of the country. Jurassic sandstone form a ruiniform relief, of erosive origin, on the site. It benefits from an abundant hydrography and shelters a remarkable biodiversity, including several endemic species and several types of lemurs. Despite the disturbances caused by human activities, a relict gallery forest still exists in the crevasses of the massif.

The Mangoky is a river on the western slope of Madagascar. Its basin straddles the regions of Menabe and Atsimo-Andrefana. It flows into the Mozambique Channel through a delta of approximately 2,000 km². The Mangoky comes from the confluence of the Matsiatra and the Mananatana. It is the largest river in Madagascar by the area of its watershed after the Betsiboka and also, with its 822 km of course from its source in Ihosy, the longest river in Madagascar.

Ambatomilo is a small Vezo fishing village located 5 hours north of Toliara on the Western Coast. Arguably with the best and whitest sandy beach of Madagascar. Whale watching is possible from July to Septmeber hiring a local canoe. The best place to rest after an adventure trip. 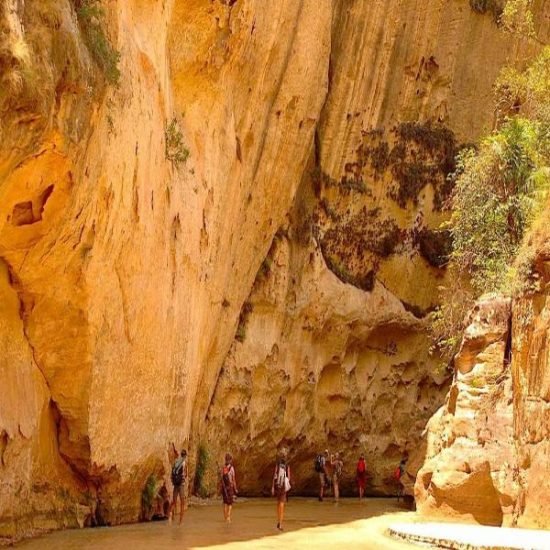 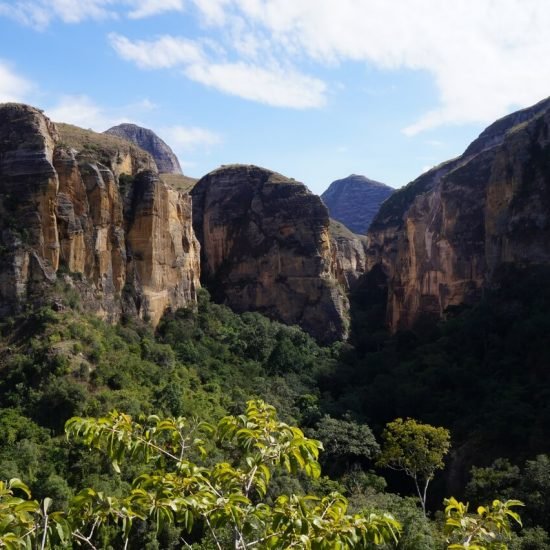 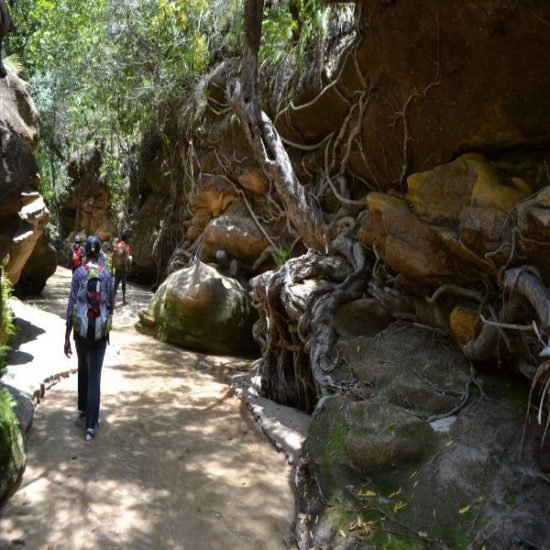 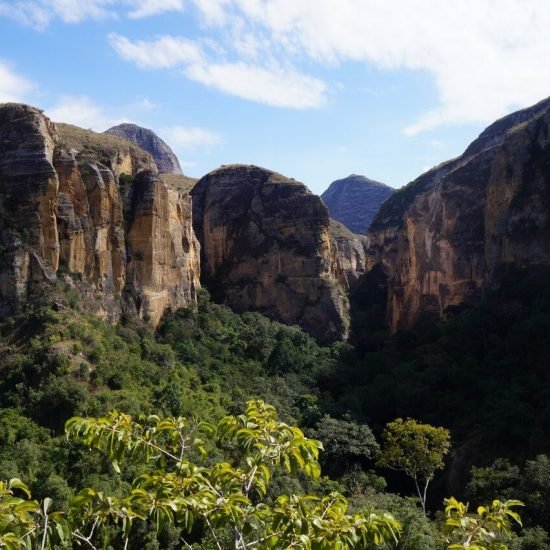 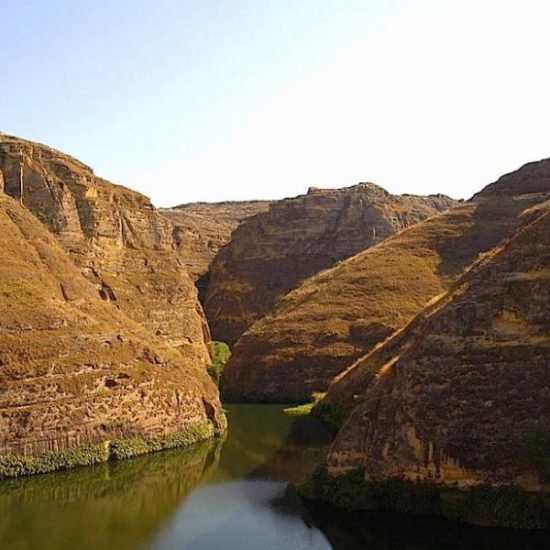