Masoala, a national park created in 1997 in North-East of Madagascar, on the omonime peninsula. It is the largest protected area on the island with its 235,000 ha of tropical rain forest. The park was created to manage, protect and restore the Malagasy natural heritage which is on the island subjected to strong pressures (15 species of lemurs as well as dozens of other species have disappeared in the last 50 years).

In the southwest of the park, the forest is still in direct contact with the sea and its spray. This type of ecotone has become very rare due to the coastal routes that have been created almost everywhere in the world. It offers a good example of eco-landscape integrity.
Masoala has preserved remarkable landscapes, the last memories of what the green island was (one of the ancient names of Madagascar); relic of the dense rainforest where, as the botanist Martin Calmander recalled filmed on site by Yann-Arthus Bertrand, said, “this forest is so dense that 90% of the light never reaches the ground! ». This makes it one of the most favorable places for ecotourism and sustainable tourism as well as the study of old tropical forests and marine environments.  An exceptional place to discover its great biodiversity on land as well as in the marine park.

A trip to the largest protected area in Madagascar
With its 2300 km2 land park and its 100 km2 marine park, Masoala National Park offers a wide variety of landscapes: swamps and mangroves, rainforest, coastal forest and alluvial forest. For biologists, the park is a real paradise where you can discover around fifty species of palm trees, some of which are endemic such as the trihedral palm. In addition to varieties of palm trees, many orchid species are among the 1,100 plant species recorded in the terrestrial park. You will also discover an endemic carnivorous plant called Nepenthes masoalensis.

The marine park is not to be outdone, this one today has 99 species of seaweed to discover during one of your dives! With its hot and humid climate (cooler in August and an upsurge between September and November) associated with exceptional rainfall throughout the year, the region is considered to be the rainiest on the Big Island, which explains its great biodiversity. 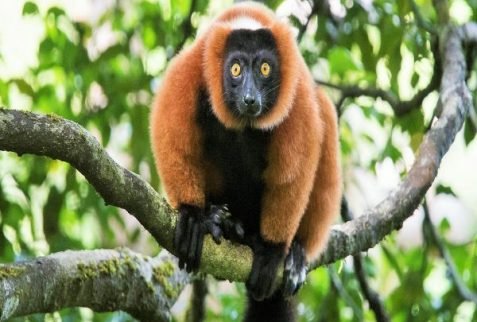 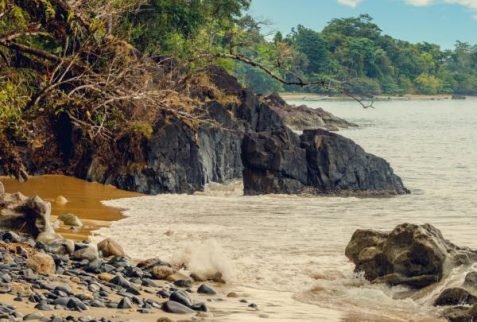 The diversity of its forests has allowed many animal species to find refuge there. The complex has a high endemicity rate, some of which are ranked among the most threatened by international conservation. You will discover the Aye-Aye, a nocturnal lemur as well as 10 other species of lemurs like the Vari Roux. Around sixty reptile species including the Uroplate, various chameleon species, around 40 amphibian species such as the tomato frog and four species of sea turtle also cohabit in the area.

In terms of avifauna, Phelsuma laticauda also called the Golden dust Gecko, the Madagascar serpent eagle or Eutriorchis astur as well as the Madagascar red owl are among the 102 species of birds to discover. A Madagascan carnivore, the mongoose Salanoia concolor will surprise you! In the marine park, the presence of coral reefs has made the site one of the most beautiful in the world where you can discover a wide variety of multicolored marine fish of all sizes.

Nearly 50% of the Madagascan flora is also found in Masoala National Park. Indeed, around fifty varieties of palm trees are listed on the peninsula. Nepenthes masoalensis, a carnivorous plant endemic to the Big Island is also found within the park. Many varieties of ferns also make up the lush vegetation of the park. In addition, 99 different species of seaweed are listed on the Masoala coast.

By plane from Antananarivo or Tamatave via Maroantsetra.

To explore the park, consider an expedition style trip from Maroantsetra to Cap East. Expect to pay €100 pp per day, all inclusive, minimum 8 days. If you wish a more relaxing adventure, consider the lodges on the east coast of the peninsula on the Tampolo Marine Park.