This is Madagascar in its most beautiful, cultural and historical setting. Those who challenge the fate of the weather (as rain is never too far away) may find the paradise they have always dreamed of with deserted beaches of soft white sand, shaded by coconut palms! This is Sainte Marie Island, located one hour flight from Antananarivo or, 10 hours by car, always from the capital, to Mahambo with a 4 hours rough-ish crossing by ferry (or 1 hour from Soanierana-Ivongo, but with 3 more hours further driving from Mahambo).

Nosy Boraha, or Sainte-Marie as we know it, runs parallel to the east coast of Madagascar about 30km off the coast of Soanierana-Ivongo. Regular rains have made the island a vast tropical garden with coconut, cinnamon and clove trees and various orchids. Banana, papaya and mango trees thrive everywhere on the island.

The islanders of Sainte Marie devote themselves to agriculture (rice, coffee, vanilla and cloves), livestock and fishing (fish, lobster, shrimp). 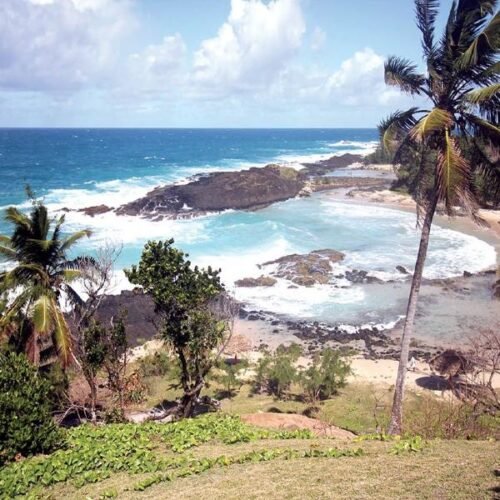 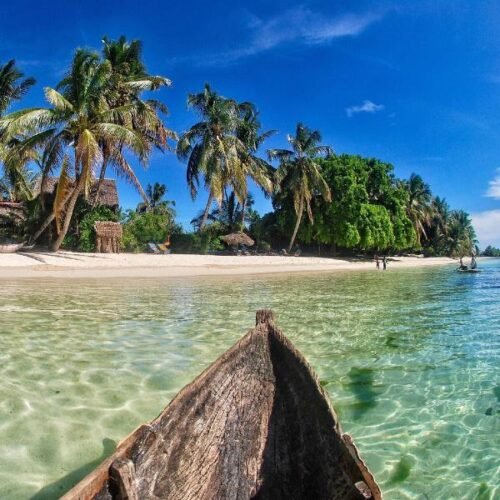 Nosy Boraha, “the island of Ibrahim” or “the island of Abraham” owes its name to the distant arrival of a Muslim or Jewish merchant. At the beginning of the sixteenth century, the Portuguese, who discovered it on the day of the Assumption then baptized the island Santa Maria. The name was later Sainte Marie under french colony.

Around the end of the 17th century, pirates of all nationalities who roamed the Indian Ocean made it their headquarters. The island preserves the memory of the tumultuous loves of the beautiful queen Betia (or Bety) and the corporal Filet, known as Bigorne, an agent of the Company of the Indies. Bety, daughter of King Ratsimilaho, received Sainte Marie as a gift after marrying Filet in 1750. Filet officially ceded the island to France in 1750, the first step towards the colonization of Madagascar.

In the nineteenth century, Nosy Boraha served as a base for the Franco-British offensives against Toamasina (Tamatave) and Mahavelona. The island was later administered by the Reunión in 1876, by Antsiranana (Diégo-Suarez) in 1888 and passed back to the French in 1896, the year of the colonization of Madagascar.

What to see in Sainte Marie

Ambodifotatra, the small port located at the entrance to a bay on the southwestern coast, is the capital of the island. At the southern exit of the village is the oldest Catholic church in Madagascar (1859), the Notre Dame de l’Assomption. It was built on the initiative of Talmond, the first bishop of the Big Island, who rests within its walls. Its cast iron altar is a gift from Empress Eugenia. The Old Fort of Sainte-Marie dominates the town from the top of its hill.

Near the capital, we follow a path that opens at the southern end of a dam that follows the south-east coast of the bay, between coves and palm trees. Practicable at low tide, we arrive at the pirate cemetery.
On the southeastern tip of the island, on a beach protected by the coral reef, a large cave opens up at the foot of the cliff. From Ankarena, it is possible to reach Nosy Fasika (“the sand island”) by pirogue, a fantastic place to snorkel.
In the extreme south of Sainte Marie, separated by a strait of approx. 20 meters, we find Nosy Nato, known as Île aux Nattes from the name of a very hard tree sought after by carpenters at the southern end of Nosy Boraha. From the small village of Aniribe, where the boatmen dock, a path climbs through the vegetation to an old lighthouse (today guesthouse known as White House). The panorama embraces the entire island and the coast of Madagascar. After crossing the large palm grove that covers the eastern side, we end up on sandy beaches bordered by casuarina trees. We recommend a tour of the island (3 km) following the coast to return to Aniribe.

On the north-eastern coast of Sainte Marie, we find the splendid beach of Ambodiatafana. During high tide, fishermen gather around this “natural pool” but bathing is prohibited for religious reasons.
For swimming we recommend the beaches that follow one another from Mangalimaso to Ambatoroa on the west coast and, from Sahasilotra to Ankoalamare on the east coast.

Nature, beaches and sea activities are synonymous with Sainte Marie. The number one attraction of the island, however, remains the observation of humpback whales between the end of June and the beginning of September. 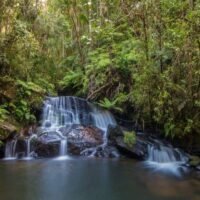 €900
A tour that embraces the most Eastern Madagascar has to offer. You'll love the laid back tropical feel, but at the same time you want to experience a different world. Most probably, you are also after one of the experiences of a lifetime, watch the humpback whales from June to September.
10 Days