The city of Morondava, capital of the Menabe region, is located in the southwest of Madagascar, approx. 700 km from the capital, Antananarivo. Famous for its proximity to the iconic Avenue of the Baobabs, Morondava is also the ideal starting point for discovering the Tsingys of Bemaraha and for the start of an epic adventure in 4WD along the west coast to Tulear. 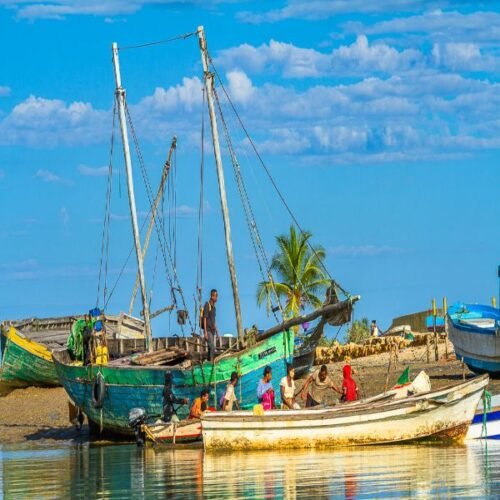 Morondava owes its name to its river which has changed its name over the last 3 centuries. It was the Jesuit Father Luiz Mariano, who during a new Portuguese expedition to the west coast of Madagascar, discovered the river in 1623 and baptized it Manaputa. He was later named Morandavo in 1716 and Moranda or Mouroundave in 1765.

The reign of Menabe and foreign traders have been trading in Morondava since the 17th century. Islamic traders traded cotton and zebu skins for firearms and ammunition, the business of which was the thriving at the end of the 18th century.

In the 19th century, Morondava became a landing point for slaves from Makoa, an ethnic group from Mozambique, and in transit before their return to the southwest and inland. Later in the early 1900s, large ships anchored about a mile offshore. The goods are shipped in wet or stranded schooners in the lagoon parallel to the sea which forms an internal basin dried up at low tide and accessible at high tide to 20-ton sailboats. These schooners take advantage of the rising tide to cross the pass and transfer their cargo to the ships. In fact, although Morondava is an important port in Madagascar, there is no real port for large ships.

What to See in Morondava

The city itself does not have much to offer and, despite having endless beautiful sandy beaches they are not the best for cleanliness. The Baobabs Avenue is certainly the iconic image of Madagascar, it is located about 30 km away. Not to miss a visit to the largest mangrove ecosystem in the country and the excursion to the authentic fishing village of Betania. Betania can be reached on typical dugout canoe, not the maximum of comfort and stability but safe and clean to the environment.

From Morondava begins the trip along the RN8 to reach the Tsingy de Bemaraha, 220 km north. 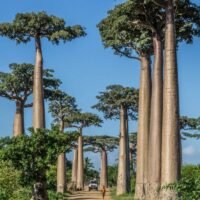 €1200
A truly magnificent tour from the capital to Toliara, descending the wild isolated river Tsiribihina to reach one of the wonder of Madagascar, the Tsingy de Bemaraha and the famous Baobabs Avenue. We travel southwards along the western coast, driving through incredible unique landscapes like sahavanas, swamps, white sandy dunes to end the tour in one of the most idyllic beach.
16 Days 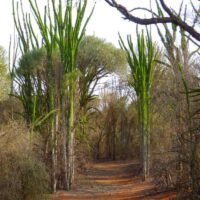 The Great South and the Tsingy

€2500
An incredible three weeks private from Fort Dauphin via the southernmost point of Madagascar along the most beautiful, wild and authentic western coast to end at the famous Baobabs Avenue and the labyrinth of the Tsingy de Bamaraha.
21 Days 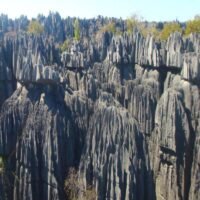 €800
A private, 8 days, authentic, express tour of Madagascar, from the capital of Antananarivo to Baobabs Avenue via the River Tsiribihina and the world famous National Park of the Tsingy de Bemaraha.